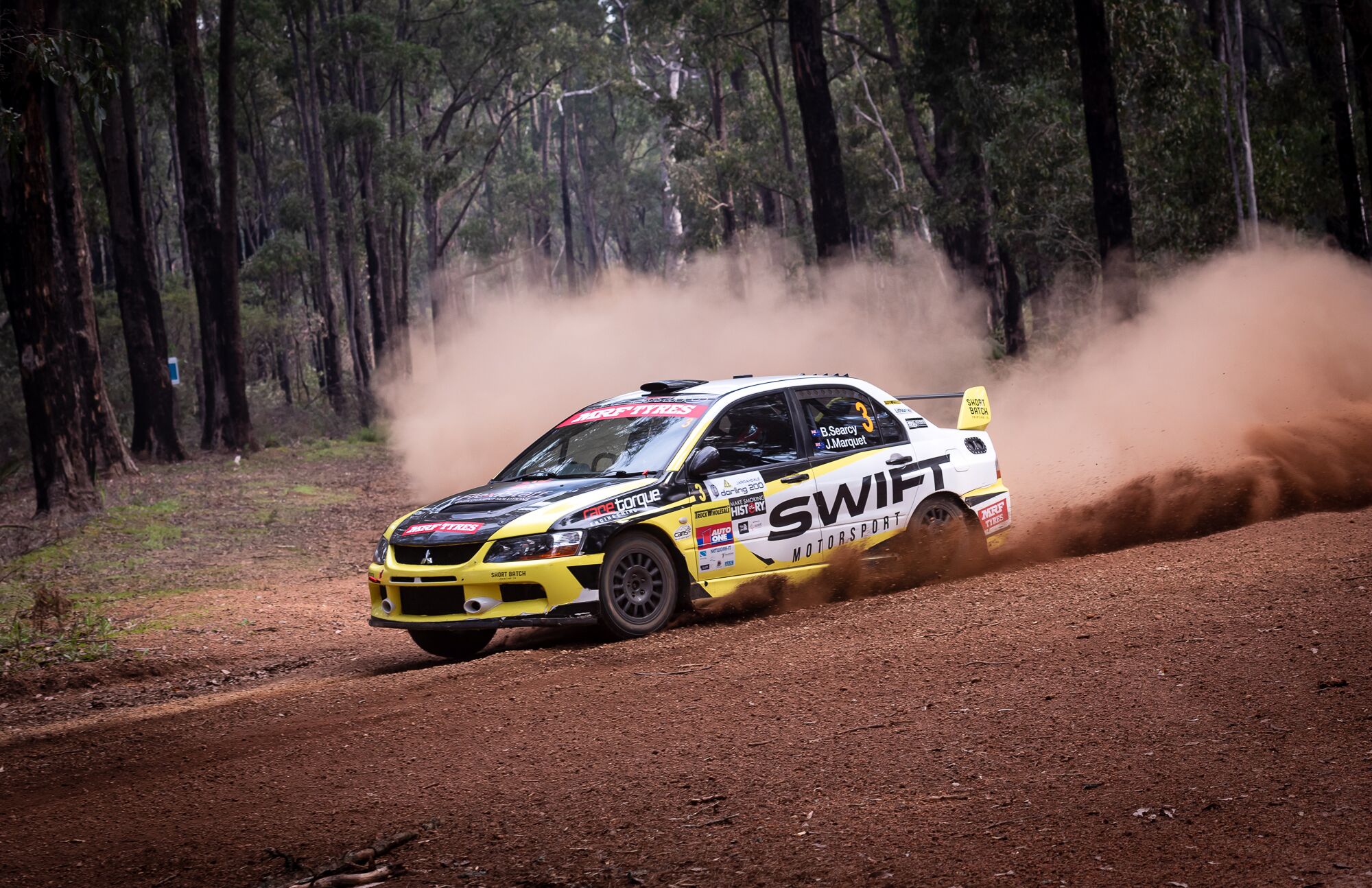 The podium for the Make Smoking History Expects Cup, the final round of the CAMS Zestino Tyres Western Australian Rally Championship (WARC), is set to be hotly contested with second and third in the championship still undecided.

In the biggest field of the year besides the Make Smoking History Forest Rally, 38 competitors will line up at the start line in Collie, racing the clock over six stages, a total of 110 competitive kilometres in the plantations around Wellington Dam near Collie.

As previously reported, this year’s WARC outright competition was won convincingly by John O’Dowd after Round Four. He was so far in front in the points that he was impossible to beat even with two rounds to go. O’Dowd in his Skoda Fabia R5 will have his usual co-driver Toni Feaver beside him calling the notes at the Experts Cup in preparation for their Kennards Hire WRC Rally Australia campaign next month.

With the top step of the podium claimed, the battle is on for second and third in the WARC.

Ben Searcy leads the best of the rest on 239 points in the Driver’s Championship ahead of Barry McGuinness on 215 points, Craig Rando on 203 points and Razvan Vlad in a 2WD on 179.5 points outright.

With 80 points awarded to the winner, 68 points to second, 60 points to third and 52 for fourth place, it’s still anyone’s game.

Searcy who swapped seats this year from co-driver to driver in his Swift Motorsport Mitsubishi Evo 9, this time has esteemed co-driver Steve Glenney calling notes.

“I’m absolutely excited to have Steve Glenney co-driving for this last round, I need coaching in how to go fast,” said the East Vic Park resident.

“Finishing in the Championship in second place would be nice but my focus is to get experience, improve the car and my driving before the year is up so that we can start next year well.”

In the 2WD competition, Vlad leads the charge on 327 ahead of Alex White on 305 points and Glenn Alcorn on 274.

Vlad said that while he’s in a good position to take the 2WD title, they were very lucky to finish the Darling 200 with an engine that dropped a valve.

“There’s been no time to rebuild the engine so I’m using the spare one which is a lot less powerful. Both myself and (co-driver and wife) Ioana will try to avoid making mistakes, enjoy the event and we’ll see what happens,” Vlad said.

Thomas who has her father Dave Thomas calling the notes in their Able Finance Subaru Impreza WRX, said she is feeling good leading into the Experts Cup.

“The roads are nice down there and I’m feeling confident about finishing. Our game plan is to go hard yet carefully to get it to the end. It would be a pretty big deal and mean the world to me to win Rookie of the Year – if it happens, hopefully it will attracts more juniors to the sport!”

From sports administrator to rookie driver, David Smith will take his S n G Motorsport Daihatsu Charade out of the garage for the second time this year.

Smith said that after winning the Rookie Driver Trophy at his last event (Kirup), he is under no illusions he would be able to repeat the feat.

“I have been told that they give rookies a trophy at their first event so they get hooked on rallying and willingly spend many thousands of dollars over the next 20 years trying to get another one,” he quipped.

Smith is joined by another Rookie, co-Driver, John Butcher.

“John is a Driving Instructor at RallySchool.com.au, so whilst he hasn’t had much experience calling the pace notes he is very experienced at holding on, closing his eyes and praying, while pushing the phantom brake pedal on his side.  But seriously, I am looking forward to the awesome roads around Wellington Dam and having another fun rally.”

The most experienced rookie in the field, six-time Targa West champion Peter Major, debuted in a gravel rally at the Darling 200 finishing second, is sure to keep the rest of the field on their toes as he races the clock in his Totally 4×4 Mitsubishi Evo 7.

The shorter format Clubman Cup and Clubman Masters class is more accessible to those with less time, less budget or those who are new to the sport. They will the clock on the first three stages of the Experts Cup over 55 competitive kilometres.

Entry is free into the Service Park at Wallsend Trotting Grounds; the entry is off Bridge Street.

There are two spectator locations providing plenty of opportunity to see the action. Head down Mungalup Road for approximately 17 kilometres and follow the signs. The Spectator Guide includes more detailed instructions and an complete Entry List.