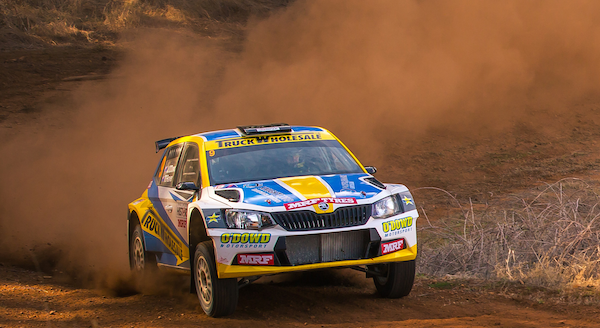 Round two of the CAMS Zestino Tyres Western Australian Rally Championship (WARC), the Trade Hire Karri Rally, will be held in Nyamup, east of Manjimup on Saturday 11 May.

Clerk of Course Neil Trethowen said competitors would be physically and mentally challenged.

“The rally is taking place in a unique area with some wide open spaces where they can really go for it and push cars to the limit, and then there’s some really technical tight and twisty sections to make it interesting. The stages are in great condition and it should be a really good rally,” Trethowen said.

“Nyamup is an original Bunnings timber town and there’s nothing there now except a few privately owned holiday cottages, so it’s peaceful and quiet – that is until the rally comes through!” Trethowen quipped.

“The weather is looking perfect, mild with slight wind, it should be a beautiful weekend for a rally.”

The R5 car is a level below a World Rally Car and used in Europe in WRC2 events.

O’Dowd said that being in the only R5 in the field was an advantage.

“All of the other competitors are in production-based WRXs and EVOs. So, on paper anyway, we have an advantage. That said, we’ve still got to make it to the finish line and bank points. I’d like to explore the limits of the car a bit more, but I’ll need to temper that with the knowledge that if I make any mistakes, there are really strong crews, like Kody Reynolds and Stephen Oxley, ready to take advantage,” O’Dowd said.

The reigning State Champion purchased the Skoda Fabia R5 with the intention of defending his 2018 WARC title as well as move forward in the Australian Rally Championship.

“It was great winning last year, but it’s whetted my appetite for more,” the Gooseberry Hill resident commented. “And with the state rules now allowing R5 cars to be used, the timing was perfect.”

Hoping for a better start in Round Two than he had in the season’s opener in Busselton is Ben Searcy, who swapped seats to drive this year. Calling notes beside him is James Marquet.

Despite missing the first day at the Make Smoking History Forest Rally, Searcy and Marquet in their Swift Motorsport Mitsubishi Lancer Evo 9 showed what a threat they could be, finishing the second day in second place behind O’Dowd.

“I’ve never done the Karri Rally before. I’ve done rallies around that area, but not that one specifically, so I’m really looking forward to it,” said Searcy, who is also a co-driver for Emma Gilmore in this year’s New Zealand Rally Championship

Reigning national co-driver champion Searcy has been co-driver for four Australian Rally Champions, six of the top-eight in Australia, and said that while he loves to co-drive, being behind the wheel of his car was so much fun.

“After I finished my first stage at the Forest Rally, the team all commented that my smile was huge!” the East Vic Park resident said.

Twenty-nine cars will be at the start line from 12.30pm on Saturday 11 May and race the clock in two-minute intervals.

There is a fantastic spectator point in Nyamup where the rally cars will go screaming past four times before turning left and heading down to the ‘water splash’. The first cars are expected from 12.50pm and entry is free. Spectators are encouraged to buy food and drink in Manjimup to take with them.