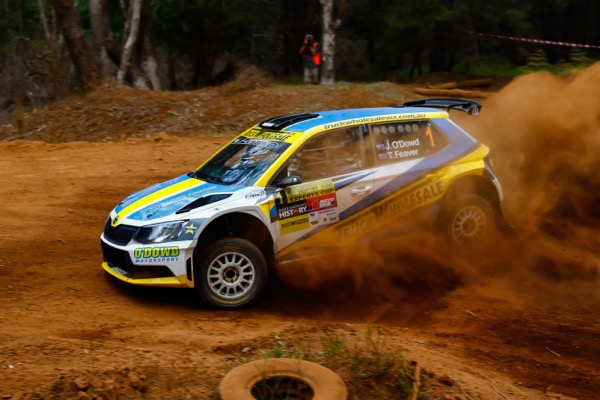 The Make Smoking History Experts Cup, the final round of the CAMS Zestino Tyres Western Australian Rally Championship (WARC), is done and dusted for 2019 after a fight for the final podium places.

There were 38 competitors at the start line and 33 that crossed the finish line after racing the clock over six stages, a total of 110 competitive kilometres in the plantations around Wellington Dam south of Collie. In hot and sunny conditions, the dry stages became very dusty as the wind dropped off in the afternoon.

O’Dowd, who entered five and won all five WARC events, said it had been a good year.

“If you’d told me at the start of the season that we would win five out of five, I wouldn’t have believed it. The car has been great, Race Torque has done an amazing job and so has my co-driver Toni. I’m very happy,” O’Dowd said.

In his second consecutive championship win, O’Dowd said that he’ll be contesting the WARC again next year to go for a hat trick.

“Our concentration in 2020 will be on the national championship but we will still contest the WA Championship, not only because I want to support it, but because I love the pea gravel surface that’s unique to WA.”

Before next year though, O’Dowd will be heading east to compete in the World Rally Championship event, the Kennards Hire Rally Australia from 14 to 17 November on the Coffs Coast in NSW.

“It’s unique to our sport that anyone can enter a WRC event and rally on the same stages as the world’s best. I’m hoping we can finish off a great year on a high at Rally Australia,” O’Dowd said.

O’Dowd said he’d like to thank all rally officials and volunteers who do an amazing job.

Finishing second in the Experts Cup was Stephen Oxley with co-driver Michael Wood in their CASA Security Subaru Impreza STI.

“It was a technical event, lots of overshooting opportunities on 90-degree corners and hairpin bends and it was a bit dusty especially on the fifth stage. But generally, we had a good run. We didn’t make too many mistakes, didn’t break anything and importantly, we had a good time,” Oxley said.

“I’m so happy with finishing second, there was some some serious competition from Ben Searcy and Brad Markovic who made me push, particularly in the last stage.”

Oxley is retiring from driving but said that he’ll stay involved in the sport as an official.

Rounding out the top three of the Experts Cup was Ben Searcy in his Swift Motorsport Mitsubishi Lancer Evo 9, this time with specialist co-driver Steve Glenney. Searcy finished the WARC in second place outright.

Searcy said that his plan this year was always to go out and learn.

“I’m really happy with the result – to finish second in the championship in my first year back driving in a very long time is great. I’ve really enjoyed the year and I couldn’t have done it without help of the team, Race Torque and all my sponsors,” said Searcy, who added that he’ll be back behind the wheel in 2020.

“It was really valuable having Steve Glenney in the passenger seat giving advice and guidance, and he’s given me plenty of homework to do before next season.”

In just his second year competing, Craig Rando finished the WARC in third outright when he crossed the final time control at Experts Cup in fifth place with his co-driver Matthew Scafidi in their Rando Constructions Subaru Impreza WRX.

Rando thanked organisers and volunteers and said that this year’s rallies and stages were amazing.

“A massive thanks goes out to my family, my co-driver Matt, Rando Constructions and Race Torque for the help and support all year.”

There were a few thrills and spills during the rally. Experienced tarmac rally driver Peter Major experienced his first gravel rally ‘off’ on the first stage before getting back on track only to have to retire with a mechanical after Stage 4.

Kody Reynolds who also had an off on the same corner as Major but on the second pass on Stage 4, had worse luck when Glenn Alcorn came over a crest of hill, hitting Reynolds’ beached car in the rear corner pushing it down the hill, making recovery a little trickier. That didn’t seem to worry Reynolds who, in a true show of comradeship and the rally spirit, helped Alcorn push his car back onto the stage so he could keep competing while Reynolds was forced to retire.

In the 2WD competition, Razvan Vlad started the Experts Cup leading the Drivers Championship ahead of Alex White and Glenn Alcorn and finished it by winning every stage, winning the rally and winning the 2WD Championship.

Vlad said that they had originally planned to go slower in their MaxyRally Ford Fiesta because they were using an old engine.

“But we did the calculations and there was a small chance that my wife Ioana could win the co-driver’s championship if Alex and Lisa White didn’t finish the event and we won the event, so we pushed on the first three stages. We were comfortable and didn’t have any issues, so we continued to push in the last three stages and Ioana has come out on top of the co-drivers’ table,” Vlad said.

“We are very happy and already working on what we need to do for next year.”

Finishing the rally in second place was Michael Joss and Megan Logue in their Nissan Silvia S13 and Gregory and Deeann Flood rounded out the top three in the Mitsubishi Lancer.

In the 2019 2WD Drivers Championship, Glenn Alcorn finished in second place and Alex White, who was forced to retire with a fuel pump issue was able to clinch the final championship podium place.

Competitors in the shorter format Clubman Cup and Clubman Masters class rallied along the first three stages, a total of 55 competitive kilometres.

In the Clubman Cup, Rod Fowler and Keith Mayes finished the rally fastest in their Peugeot 206 GTI ahead of Keven Hollingsworth and Simon Gratton in their Suzuki Swift with rookies David Walbran and Bryden Coker rounding out the top three in their Mitsubishi Lancer.

In the Clubman Masters, John Ludlam and Steven Proctor took the top step of the podium finishing fastest in their Datsun 1600 Dazda ahead of Brock Nicoli and Lachlan Beresford in their Hyundai Lantra and rally veteran Andy van Kann with rookie co-driver Helen Lunsmann finished third in their Toyota Corolla TE27.

Before the Make Smoking History Experts Cup, both Clubman Cup and Clubman Masters Championships had already been won by Stephen Vass and Lance Stringer respectively.

The Clubman class is designed to be more accessible to those with less time, less budget or those who are new to the sport.

In the Rookies, 17-year-old Toodyay student Kelly Thomas finished the Experts Cup with just 2WD after a mechanical issue which slowed her time. She finished in 18thplace outright, which was enough to secure the title of State Rookie Driver of the Year and her father and co-driver Dave Thomas took the State Rookie Co-Driver of the Year.

Thomas said it meant the world to her to win Rookie of the year with her father in their Able Finance Subaru Impreza WRX.

“It’s definitely a proud moment to win Rookie of the Year against all the others, it was a tough close battle but it all came down to consistency. To finish my first state round with finishing every event is a huge achievement!”

Better known for his sports administration skills than his driving, rookie David Smith made memories he’d rather forget when he ‘parked’ his S n G Motorsport Daihatsu Charade on Stage 2.

“It was at Instruction 25 over a fast crest that my ability expired, and I threw it off the road backwards ending up…Parked!  At least now my co-driver John Butcher has experienced getting out the safety triangles and showing the OK board,” shrugged Smith.

WARC Event Director Ross Tapper said that it’s been a great season and thanked sponsors and officials for their support.

“Besides sponsors and officials, I’d like to make a special thanks to competitors for being part of it. Without competitors, we wouldn’t have a championship.”

Tapper said that a new event on the 2020 calendar will be announced soon.