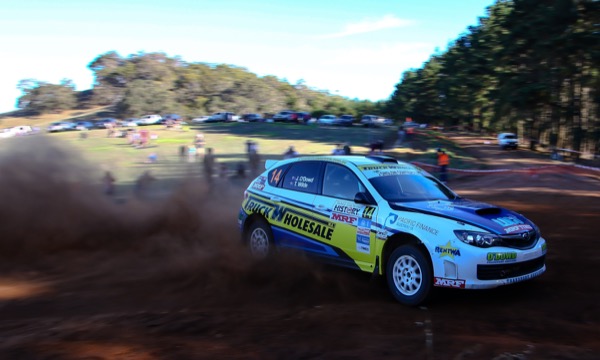 Competitors will have their eye on the prize in the third round of the Onslow Contracting Western Australian Rally Championship (WARC), the MRF Tyres Boddington Rally on Sunday 3rd June 2018.

There are 35 competitors who will tackle eight stages over 130.72 competitive kilometres in and around Boddington situated about 130 kilometres southeast of Perth.

“This year has been fantastic in the state series, and I’d love to add a WARC title to the trophy cabinet!” O’Dowd said.

“So the decision to miss Canberra (a round of the Asia Pacific Rally Championship that clashes with Boddington) was a pretty easy one to make. I just have to make sure I bank the maximum possible points at Boddington. Steven Oxley has been really strong competition this year.” O’Dowd has had co-driver Tom Wilde calling the notes during the first two rounds and this time will have Toni Feaver sitting beside him, Markovic’s usual co-driver, as Wilde is away in the USA.

O’Dowd’s title campaign could be a little easier without pressure from Markovic who took a clean sweep of round two of the WARC, the Make Smoking History Forest Rally in April.

“It’s not a decision I’ve taken lightly, but I’ve decided to miss the next few WARC rounds,” said Markovic, who injured his back in a rally accident last year. “My back needs more time to heal and as much as I love nothing more than driving rally cars, it’s not good for my back in its current state.”

Markovic recently sold his production-based Subaru WRX STI and is reported to be looking at options for a new car including moving up to an R5 category rally car.

There’s likely to be a good battle in the 2WD Championship; Alex White and co-driver Lisa White lead the Driver and Co-Driver Standings respectively by 10 points over Razvan Vlad and Daymon Nicoli. In third place, trailing the leaders by 24 points are the winners of the Forest Rally, Mike Young and Scott Beckwith, which is quite a feat to be sitting in third place given they didn’t compete in round one. The Clubman Cup, which is half the length and distance of the WA State Rally Championship at 65.36 competitive kilometres, is led by Graeme and Kathy Miles on 136 points, followed by Kevin and Aaron Hollingsworth on 112 points and Stephen Vass and Ashley Burton on 102 points.

Of the field of 35, 29 are competing in the State Championship and six in the Clubman.

Clerk of Course Wendy Walker said that the MRF Tyres Boddington Rally promises to challenge the skills of both driver and co-driver.

“There are four stage run twice, one brand new stage the other in reverse direction from last year with a few changes,” Walker said.

“Dylan King will be first out on the road, and it’s great to see Shane Eather back after four years.”

The MRF Tyres Boddington Rally Service Park is located at the Riding Club in Boddington, is free to enter and everyone is welcome.

Full details of current championship standings can be found via www.rallywa.com/points.