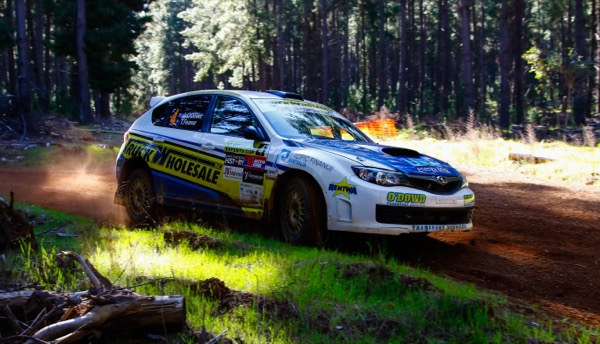 Competitors and cars were tested in the fifth and final round of CAMS WA Rally Championship (WARC), the Make Smoking History Experts Cup that was held on Saturday (September 15) in Collie, about 200 kilometres south east of Perth.

After a crisp morning, the sunny blue skies made for perfect rally conditions. Stages were mixed with some hard and compact areas and some boggy conditions following the newly introduced water splash that challenged competitors. The Make Smoking History Experts Cup was revamped this year with 9 new stages totalling 97 competitive kilometres through pine plantation around Wellington Dam, a total distance of just over 250 kilometres.

Also new was the use of the Rally Safe timing system, a first for a WARC rally. According to Clerk of Course Richard Delfos, it was faultless.

“Rally Safe worked brilliantly. We were able to resolve a few issues such as competitors being held up on stages or liaison immediately, which was a great help. We didn’t have to resort to the back up system at all,” Delfos said.

Onslow Contracting WA State Rally Championship
A close battle was expected in the final round of the WARC with John O’Dowd and Stephen Oxley both within striking distance to take the 2018 title.

However, best on ground went to Dylan King and Lee Tierney in their Natrad Malaga Subaru WRX STI, winning all nine stages and the Make Smoking History Experts Cup ahead of the newly crowned WA State Champion.

Dylan King said that despite the clean sweep of stage wins, there were some dramas with the car.

“After each run through the big water splash, water got into the intake, causing the car to misfire and we dropped time. There wasn’t much we could do – we had to struggle with lack of power, before sorting it out – we changed the air filter to a dry one after the first run but completed the second and third with a wet air filter,” King said.

“Besides that, we’re happy with the win – that’s what we came here to do,” King said.

Shaking the bridesmaid’s curse that John O’Dowd has had on four occasions, he finished in second place in his Maximum Motorsport Subaru WRX STI ahead of rival Stephen Oxley and co-driver Michael Wood also in Subaru WRX STI. That’s what was needed for O’Dowd to be crowned 2018 WA State Rally Drivers Champion.

“I finally got one!” said a jubilant O’Dowd.

“The rally was great, and we had a good run, besides hitting a rock on Stage 5 which damaged the right hand steering, but we got it back to the service park and the Maximum Motorsport crew worked their magic on it. We went back out there and managed to hold of Stephen Oxley to take the title. “This win is good for the team, good for Maximum Motorsport who were very happy,” O’Dowd said.

O’Dowd said he was looking at competing at WRC Rally Australia in Coffs Harbour in November and hopes to contest both the WARC and Australian Rally Championship next year if budget permits.

His co-driver Toni Feaver finished in the co-driver standings in second place due to not having competed alongside O’Dowd in every event.

In other news, Mick Steele and co-driver Simon Glossop rolled their Natrad Malaga Subaru Impreza WRX STI on the second stage near the spectator point. The crew uninjured, got the car back on its wheels and drove it to the service park and were forced to retire. There were 11 retirements in total, all due to mechanical issues.

It was a blistering start by Nic Box and co-driver Todd Payne in their Allstar Garage Nissan Silvia, winning the opening stage. Sadly that’s where their story ends, with a retirement.

It was Michael Joss and co-driver Megan Logue in their Mike Joss Racing Nissan Silvia who finished on the top step, taking five stages wins from a possible nine. In second place was Dave and Kelly Thomas in their Rustic Metal Works Ford Escort Mk2; the duo aren’t in contention for the championship due to missing two rallies this season.

Rounding out the top three was Alex and Lisa White in their Information Proficiency Sigma Data Nissan Silvia.

This result sets up Joss / Logue to be contention for 2WD Championship, sitting on 308 points, 32 points behind White / White on 340 points.

“It was good fun,” said Alex White. “We did the first three stages with the brakes not working well and we almost ran out of time at service.”

“We built a new engine after the last one expired at the Kirrup Rally, and we’ve both been travelling for work for four weeks – so the car was only tuned on Thursday night before the event – Friday was the car’s first proper run.

“The new stages were interesting but the water splash caused havoc – we lost significant time each time we went through it.”

Alex White said that he was feeling optimistic about the championship title, which will be decided at the final round, the Darling 200 in Chidlow on October 13, 2018.

Clubman Cup & Clubman Masters
The Clubman Cup and Clubman Masters competition is half the length / distance of the WA State Rally Championship, designed to make it more accessible to enthusiasts and encourage those without the budget to compete in the WARC. Clubman competitors tackled 6 stages over 64 competitive kilometres.

Winning the Make Smoke History Experts Cup in the Clubman Cup category, finishing their first event of the season, was Lance Stringer and co-driver Jace Van Saarloos in their Nissan Silvia.

“We’re very happy with the result – this is the first time this year we’ve finished an event,” said Stringer. “We weren’t able to attend a couple of events and we retired at two others with a drive shaft mechanical and another with a blown gear box. This time, the car was bulletproof.

“The rally had everything you want in one, long sweeping corners, challenging technical sections and fantastic volunteers.

“The water splash was tricky – it made me happy that I wasn’t driving a 1970s carburettor car, but I thought if others can get through it then I can too, and we did – our theory was to try to launch into it like a dog jumping into a dam.”

Although not in contention for the Clubman Cup championship, Stringer said that he intends to contest the Darling 200 in Jarrahdale on November 10.

“We won the Darling 200 last year so we’re planning to defend that title,” Stringer said.

The Clubman Cup standings sees Graeme and Kathy Miles, who finished the Experts Cup in fourth place overall, on top with 336 points, ahead of Stephen Vass and Ashley Burton on 298 and Kevin and Aaron Hollingsworth on 268.

In the Clubman Masters, it ended up being a one-car rally won by Carl Rattenbury and Jeremy Edwards in their Titan Ford Ford-Escort Mk1 after Julian Wright and Jeff Huggins suffered a mechanical in their Datsun 1200 Coupe forcing them to retire in the third stage. Next – Round 6
The Darling 200 is final round of the WA Rally 2WD Championship, Clubman Cup and Clubman Masters and will be held in Chidlow on October 13, 2018.