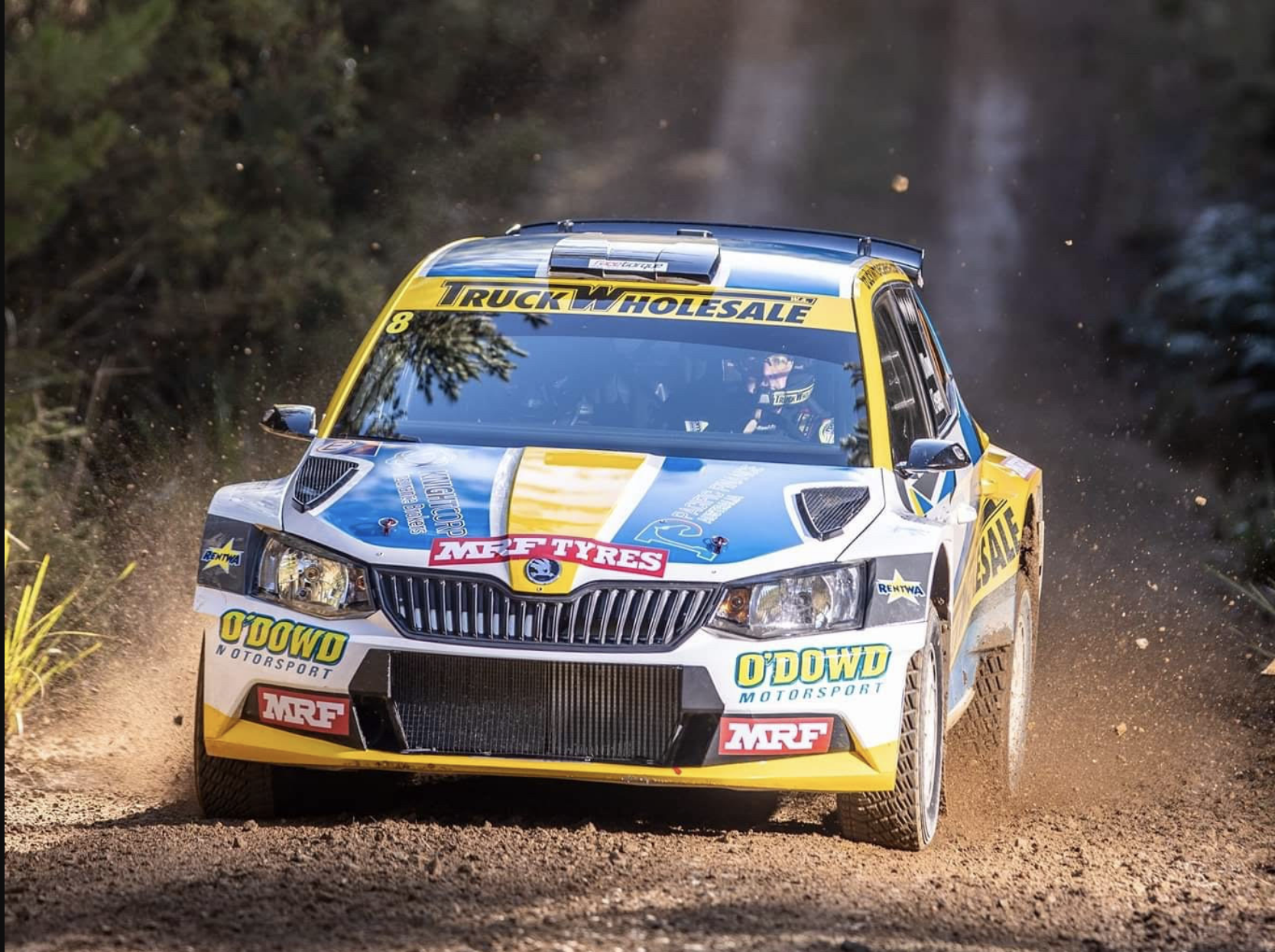 The picturesque area about 50 kilometres south-east of Bunbury will host 32 competitors vying for WARC points hoping to close the 127-point lead O’Dowd has in the Drivers’ Championship.

Competitors will tackle six special stages totalling 132 competitive kilometres. Clerk of Course Tony Floyd said that despite the rain, the stages are in great condition.

“We were driving on them yesterday and the grip levels are quite good. There’s certainly some big puddles, there definitely slippery bits, but overall, the stages are in pretty good condition,” Floyd said.

“The roads are magic, the competitors should have a fantastic rally.”

O’Dowd and co-driver Toni Feaver in their Truck Wholesale WA Skoda Fabia R5, which is a level below a World Rally Car and used in Europe in WRC2 events, won’t be resting on their laurels.

“We still have a long way to go in the series, that’s for sure. Craig Rando did a great job at the last round at Boddington, and Stephen Oxley and Ben Searcy will both be back for Kirup. All of these guys are fast and ready to take advantage of any mistakes we make. So I’ll have to be at the top of my game,” O’Dowd said.

“The challenge of these one-day events is that if you do make a mistake, with an ‘off’ or if you break something on the car, you’re playing ‘catch up’ for the whole event. There’s no second day to make up time,” said O’Dowd who is hoping for a better finish than last year where the car suffered throttle problems after it was damaged from a hard landing.

Ben Searcy and co-driver Jimmy Marquet in their Swift Motorsport Mitsubishi Lancer Evo 9 have O’Dowd firmly in their sights.

“With the weather conditions, anything’s possible,” Searcy said. “I got a sponsor too! MRF Tyres is supporting us and I can’t wait to try my new tyres and see if they will help make up some speed. My plan – chase O’Dowd down.”

A familiar face in the WARC has switched sides from administrative to driver. David Smith will be competing in his first gravel rally in his 2WD S ‘n’ G Motorsport / Targa West Daihatsu Charade with Keian Guy calling the notes.

“After 20 years or so of helping to organise rallies, it was about time that I had a drive myself to see what all the fuss was about,” Smith said.

“After a private testing session last weekend, I thought, bugger, I should have done this years ago! Now that I have crossed to the dark side and become a driver, I have already prepared a range of excuses in case I need them this weekend: ‘It was too wet.  It was too dry. If they are faster than me, they must be cheating. It’s only got 1.3 litres of very underwhelming horsepower…’ And if all else fails it was the co-driver’s fault, it’s always the co-driver’s fault!” quipped Smith, sounding like a seasoned rally driver already.

After Kirup there are two more rounds of the WARC. There are 80 points for the win, which could cement O’Dowd’s campaign for back to back WARC titles or open up the battle.

There are two free spectator points for the Wheels on Yirrigan Kumho Tyre Stages near Kirup, with the first car leaving Kirup at 1pm.

The service park is located at the Jim McDonald Oval in Kirup and spectators are welcome.