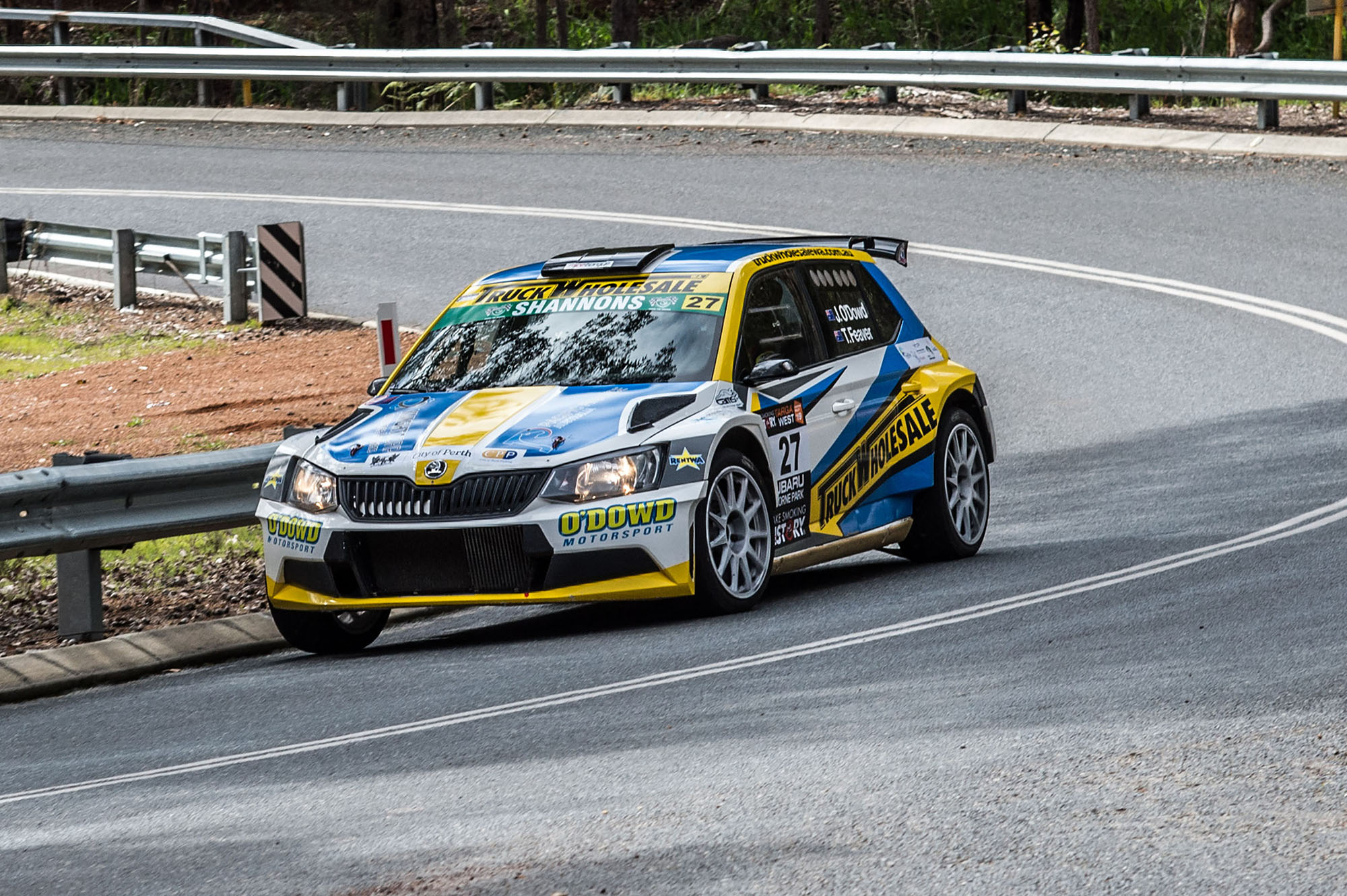 Using all of his experience gained from 13 previous starts, John O’Dowd has piloted his Skoda R5 rally car to sixth place outright at Targa West.

Competing against a field of high-performance and purpose-built tarmac rally cars, O’Dowd and co-driver Toni Feaver used all of their years of experience to bring the little Skoda home in sixth place.

“To be honest, I didn’t think we had a chance of a top-10!”, O’Dowd commented after the event.

“Our car is a specialised gravel rally car. We’ve made some minor changes for tarmac, but essentially it’s still in gravel-spec. So we are definitely behind in terms of top speed, and that really counted this year. If it had rained, we might have been a bit further up (in the results). The car is fantastic when there are low grip levels. But dry roads and long, fast stages put us  at a big disadvantage.”

But on the stages that were shorter and twistier, the Malaga, Zig Zag and City stages, the Skoda R5 shone. “With the roads dry, we had to maximise our results on the shorter stages and minimise time lost on the longer stages. And I think we were able to do that.”

“One of the advantages I have is a really experienced team, with Toni calling the notes and Race Torque setting up the car. We knew what the challenges would be at this event, and we worked to a plan to get the best result possible.”

“In the past I’ve driven Commodore V8s, Subaru WRXs and Lamborghinis at Targa West. But the Skoda is my favourite by far. It’s just a lot of fun. It needs to be driven aggressively. The more you ask of it the more it gives you. I was really working on my braking on this event; braking as late as possible. I don’t think I found the limit of the car yet, but we’re working on it!”

“The organisers and officials did a fantastic job again. It’s such a huge event, and it is really, really well run. All of the officials, whether out on the stages or behind the scenes, they give their time to make this event run so well, and they do a really professional job. I can’t thank them enough.”

O’Dowd’s attention now returns to gravel events, with the next round of the Australian Rally Championship, the Pedders Eureka Rush Rally in Victoria.

“It’s going to be a very different event to last year. There’s only a couple of stages on the Saturday, with most of the stages on the Sunday. It’s pretty short and sharp, so we’ll have to be aggressive from the start. We’re fifth in the championship at the moment, with three rounds left to run.”

“If we push a bit harder and have a little bit of luck along the way, a championship podium place isn’t beyond us. I’ve got a lot left in me, in terms of gravel rallying. We’re not here to make up the numbers. I’ve got a bit of experience under my belt with this car now. It’s time to put together the things we’ve learned about the car and to start stringing together better stage results.”

The Pedders Eureka Rush Rally is the fifth round of the Australian Rally Championship, and starts with two passes of a Super Special stage on Saturday 24 August, before moving onto the shire roads to the north-west of Ballarat on Sunday 25 August.