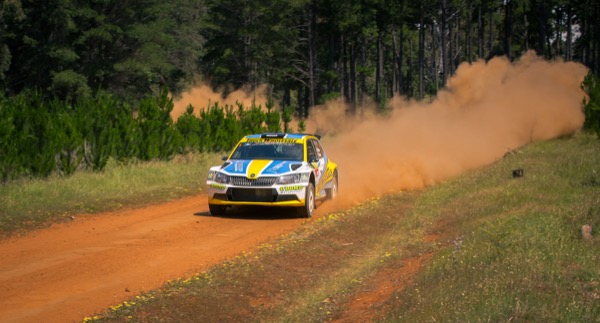 John O’Dowd and Toni Feaver have capped off a perfect WA Rally Championship, winning the Make Smoking History Expects Cup on the weekend, their fifth round win from as many events.

It was a dominant result for O’Dowd, winning all six special stages of the one day event held near Collie, WA.

It was a happy John O’Dowd at the end of Saturday’s final stage. “It was a great way to end the state series. We entered five rounds this year and we’ve managed to win all of them. I couldn’t have imagined, at the start of the season, that we could have won five from five. We’ve worked really hard all year to learn this car, and Toni and the Race Torque team have put in a stellar effort all year. I couldn’t have wanted for a better co-driver or team preparing the car.”

“And my thanks too, to all of the officials and volunteers who have prepared and run these events throughout the year. There is a massive amount of organisation goes into running a state championship like we have in WA. We just can’t thank them enough.”

Most importantly for O’Dowd, the Skoda Fabia R5 completed the event without damage.

“We have a pretty tight turn around for Rally Australia in just a few weeks time. It was great to win the final round, but I really needed to keep the car straight and not do any damage to it. The Race Torque boys will give the Skoda a freshen up this coming week and then we’ll be preparing for the trip east.”

“But before that I’ll have a coaching session with Alister McRae. I’ve been lucky to have some input from Alister this year. He has really helped me with getting to grips with driving the R5 car, so we’ll have another test session before Rally Australia.”

“I’ve got some great memories of Rally Australia. We won the ARC2 championship there a couple of years ago, and we’ve done pretty well each time we’ve been there. So I want to do well there again, and hopefully finish the ARC season in style.”