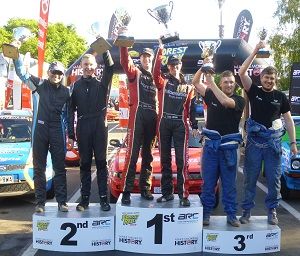 Alex and Lisa White are the reigning 2018 WA 2WD Champions after driving the Information Proficiency Nissan Silvia S13 to 6 finishes (5 rallies, including both heats of the Forest Rally). With a successful 2018 behind them, they started 2019 by achieving another first place podium at Forest Rally. Just ahead of round 2 in Manjimup I caught up with Lisa, who is the co-driver in the successful pairing.

Looking at the results of Heat 1, you had a very consistent day, always finishing in the top 4 except for one of the super special stages – 1 first, 3 seconds, 2 thirds and 3 fourths (and 1 eighth). What do you put this down to? The car? The driver? The co-driver? The team work?

“Alex completes all the mechanical preparation on the car and as a result the car is really strong and reliable. It’s not uncommon for us to enter a rally with minimal preparation, but the Christmas break gave us plenty of time to work on the car.

Alex has gone from strength to strength with his driving consistently improving over the 10 years we have rallied together. I think Forest 2018 was our 10th year together. We definitely work well together in the car.”

It looked like you had a trouble-free day? Was this the case?

“I’m not sure it was trouble free exactly, but we enjoyed the rally and produced a fantastic result. Our focus for every rally is to better our previous times and enjoy ourselves. There were many issues along the way. Even our service crew had their moment, we returned to service to find that we couldn’t get to our spot because a car had parked across the access driveway. Fortunately, an alternative route was found just in time, but it created a bit of stress for a while there. In the car we had one memorable moment with a slippy corner catching us out, pushing us offline, and resulting in us hanging the back-end over the edge of a mountain. Thankfully Alex knew exactly how to pull us out of the situation and we carried on without issue.”

You seem to enjoy (go faster) on the longer stages – do you enjoy them more?

“It’s probably more that different stages are better suited to different cars. The 2WD’s commonly drop time on slippy uphill sections where we can’t find grip. Piloting the Silvia can be a real art on some stages. Finding grip in some sections is really challenging and the Silvia automatically turns into a drift car at spectator spots. It’s a natural drift car, but Alex somehow makes it go in a straight line long enough for us to get to the next corner.

Generally our top speed isn’t improving its more that with slight improvements to the car we are getting up to speed quicker. The longer stages also show the accumulated consistency differences between drivers more.”

To pick up maximum points for heat 1, and with only 1 stage win, must have been a bonus?

“Absolutely, consistent results and a well prepared car has proven to be a winning formula for us. We have always held our own against other equal teams often trading times and stage positions. We have achieved podium results quite a few times at Forest and hoped for a top 5 finish given the fierce competition this year. Finishing in P1 was a fantastic result. We were ready to crack the champagne right there.”

Heat 2 times seemed to be similar to heat 1 except for the fact that Raz (Vlad) seemed to be on fire (winning all stages). You, Mike (Joss) and Dylan (King) seemed to be sharing seconds, thirds and fourths all day. And you three were only separated by less than 12 seconds heading in to the last 18 kilometres, with the final stage cancelled by the organisers. For the record, 2 seconds, 3 thirds, 1 fourth and 2 fifths.

“Yes Raz is a really quick driver in a really quick car. Some of the cars we compete with are also under different class rules. The Silvia is a production rally car which has less freedoms that other classes. We are still competitive of course, but the gear on some cars is amazing and in the hands of a good driver, strips 1-2 seconds a kilometre off our stage times. We run a really standard setup by comparison and have a much smaller budget. We are really happy with our times and results given the competition.”

Did it feel like a tight battle all heat? Or were you just concentrating on your own game?

“No not really. We really concentrated on or own race aiming to better our previous stage times and finish in the best position we could. We are also aware of our limitations and trying to match times with some cars is fruitless.”

How did the car hold up? Did you have any issues?

“The car is great. It could have done another Forest round straight up. We will give it a wash, check the oil, and line up at the next rally ready to go.”

“It was a real win for us personally and we had fun getting there.”

You competed closely with Mike (Joss) and Dylan (King) all event, but Raz (Vlad) and Glenn (Alcorn) ended up on the podium with you. Do you think Raz and Glenn will be a threat for the other events this year?

“No it’s more that we keep them under threat, besides you can never predict a rally result with certainty. I don’t think anyone thought we would win the championship last year until the end. Most put their money on the highly visible teams, but there are some seriously competitive drivers sitting just outside the top 5 that could produce an unexpected result. We will continue to run our own race and aim to take home more podiums this year.”