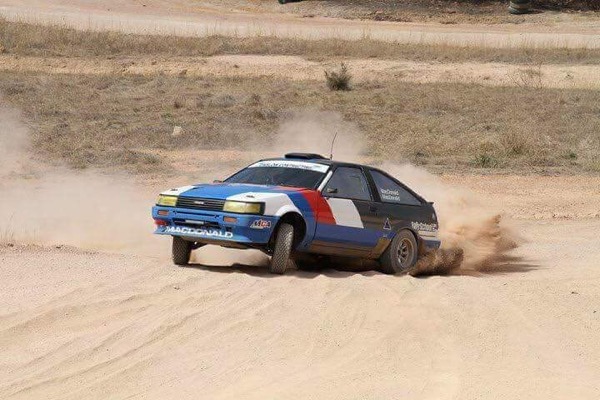 It’s a busy weekend for West Australian rally fans with three events taking place across the country that include WA drivers and co-drivers on the entry list. Searcy said the National Capital Rally was like two different rallies in one.

“We can’t wait to get back in the R5 Skoda, it’s an awesome car, should suit the Canberra roads really well.

“As an Endurance round of the championship it’s vitally important for points to finish both days in good positions and get an overall result,” said Searcy of East Vic Park.

This year with the approval of FIA and CAMS, the National Capital Rally will combine the ARPC and ARC fields into one event, meaning that for the first time all ARC competitors will be able to fight for overall victory.

Eli Evans and Ben Searcy at Make Smoking History Forest Rally
Meanwhile, ten West Australians will be competing in a classic rally in South Australia, the AGL Rally SA – Rally of the Heartlands.

It’s a blind rally, which means that there’s no recce and all crews are given road books in the morning of competition. It’s also a long rally with competitors covering a total of 863 kilometres, of which 433 are competitive kilometres on 15 stages run in daylight and at night. The longest stage is 80 kilometres and will be run in total darkness. The event also boasts a world first with the longest wind farm stage at almost 40 kilometres.

The route is centred around Burra and will take competitors to the Flinders Ranges and the Goyder Region, to the hills that are home of AGL’s wind farms and the Bluff Range.

Of the all-WA crews, Nic Box and co-driver Todd Payne will open the roads in a 1988 Nissan Silvia, Andrew MacDonald will have current WARC champion Tom Wilde next to him calling the notes in a 1983 Toyota Sprinter, Shane Attwell will be with co-driver David Moir in a 1971 Ford Falcon and Tony Gilfuis will have Stuart Young co-driving in a 1978 Ford Escort.

This is the first time Nic Box has competed in Rally of the Heartlands.

“I’m feeling pumped, but I don’t know what to expect, I’ve done a lot of national events but never a blind rally like this. And it’s such a long event, so I’m hoping I’m fit enough to go the distance,” Box said.

“My goal is to win it or bin it. I’ll push early and see how my pace compares to the rest of the field and take it from there,” the 36-year-old mechanic from Ballajura said. Another Rally of the Heartlands rookie Andrew MacDonald returns to the driver’s seat after a two-year absence from competing. He has driven across the Nullarbor with co-driver Tom Wilde in a new partnership especially for this event.

“It’s been a lot of work to get to this point but I’m excited now we’re on the road,” said MacDonald, a mechanic by trade.

“I think this is going to be a lot different to rallies I’ve done before, it’s really long with long night stages too, so it’s something to look forward to. I’ve wanted to do this one for a while.

“The car has had a lot of work done to it in the past six months, I’ve made a larger fuel tank, it’s had a new engine and new gearbox. I haven’t had a chance to rally the car yet but it’s tested well and I’m feeling confident about it.

“It’s been a while since I’ve done a rally but I’ll have Tom next to me so I’m in good hands – he’s Captain Relax and will keep me calm,” said MacDonald, 29, from Forrestfield.

MacDonald said that he wanted to thank his family and friends that helped him get the car ready, “especially my wife.”

Tom Wilde said while he was sorry to be missing the WARC, he was excited to be co-driving for MacDonald.

“We’ve been friends for a long time, and Andy’s helped me out loads in the past, so it’s my turn to return the favour and help him out,” said Wilde, a cheese maker from Nannup.

“I’m looking forward to it. The whole adventure of the weekend competing, driving across the Nullarbor with friends – it’s great. And I haven’t done a blind rally before, so it’ll be interesting.”